Therefore, the base paper can be said to be the most important consumable in the purchase of corrugated boxes. Here are some basic knowledge about base paper.

The nature of the base paper

The weight per unit area of â€‹â€‹paper is called quantitative. The allowable difference between the surface paper and the corrugating medium is 5%. The various properties of the base paper are closely related to the basis weight. Exceeding this standard can affect the quality of the product.

Quantitative test according to the national standard GB451.2 paper and quantitative test prescribed on-site test sample should be hung in the air at the specified temperature (20 Â± 20 Â°C) and relative humidity (65 Â± 2%), so that the surface can be fully exposed The conditioned air was prepared for 24 hours and weighed using a balance with a sensitivity of 0.25%. The basis weight of the paper was calculated according to the following equation and expressed as 3 digits.

If it cannot be measured at the specified temperature and relative humidity, it can be calculated according to the following steps:

The second step: Determination of moisture content of paper samples according to GB462 paper and paperboard moisture determination method

The third step: Calculate the weight of the sample by calculating the weight at a water content of 9% according to the following formula.

The thickness of the paper is represented by the metric system in millimeters (mm), the inch system is expressed in inches, and the English and the United States generally use the â€œrailâ€ for the corrugated medium paper. Each point is equal to 0.001 inch. For example, commonly used 26b/MSF2 corrugated paper thickness is 0009 inches, commonly known as "9 points" paper.

Bursting strength is a very important item in the manufacture of corrugated boxes. Samples are in diameter l. In the area of â€‹â€‹2 inches circle, the pressure is applied at a certain pressure to break it, and the pressure applied on the paper when it breaks is called the burst strength. According to the national standard, the GBl539 paperboard is used to determine the degree of rupture of the paperboard. Means of representation The metric system is expressed in kilograms per square centimeter (k9/cm2) and the English system is measured in pounds per square inch (Eb/in2).

The cardboard paper grade distinction is divided by the basis weight, such as 2009/m2, 2309/m2, 2509/m2..., and the other, according to the breaking index as the criterion for distinguishing, such as the national standard GB13024-91 board board paper Paper is divided into five levels as follows:

The original paper was cut into "6X1/2" specimens and rolled in the long direction toward the cylinder. The specimens were connected at both ends to test the pressure they could withstand. This strength was called the ring pressure strength. This strength is a unique test for the manufacture of corrugated boxes. The test method is based on the method for the determination of the ring pressure of GB 2679.8 cardboard. Because the corrugated paper is compressed in the vertical direction of the corrugated medium, it is horizontal to the base paper, and the compressive strength of the corrugated box can be estimated from the lateral crush strength of the combination base paper (including linerboard and corrugating medium). Only measure the lateral crushing strength of the base paper.

For a width of 1.5cm and a length of 18cm, a certain amount of tension is applied to the paper pattern, and the pattern is thus broken. The maximum tensile force that the pattern can withstand is called tensile strength, commonly known as tension.

The other expression of tensile strength is the breaking length BREAK-INGLENGTH), and its conversion formula is as follows:

The waterproof performance of cardboard and corrugating medium is an indispensable property of corrugated boxes. Waterproof performance of boxboard paper is called the water absorbency, which is the water absorption weight per unit area in unit time. It is generally expressed in g/m2/2mins. The test method is called COBBSIZ-INGTEST, and the box board The water absorption of the positive and negative sides of the paper is equally important. The waterproof property of the corrugated medium is called the degree of sizing or water resistance. The test method is to place a sample of corrugated medium paper in a glass containing a thiocyanide solution. In the dish, a few drops of ferric chloride solution were dropped on the surface of the sample. When the two solutions came into contact, they turned red, and the degree of sizing was expressed as the penetration time of the two solutions (seconds, SEC).

Wetstrength (WETSTRENGTH) refers to the strength that the base paper retains after it is immersed in water for 24 hours or placed in high temperature (above 400C) high humidity (95% R.H.) air for a considerable period of time. The general test base paper has a wet burst strength, a wet tensile strength, a wet ring pressure strength, and the like. This performance is caused by the paper mill adding a wet strength agent to the paste during the papermaking operation, and the fiber is produced after the heat treatment. Waterproof layer to prevent the penetration of moisture, that is to produce a strong wet effect. If a corrugated carton needs to be stored in a humid environment for a long time or it is to be refrigerated, it is necessary to use wet processed paper.

Effect of Relative Humidity on the Physical Strength of Base Paper

The physical strength of the base paper is tested in accordance with the national standard; éš¹ GBl0739 Specification for pulp, paper and paperboard samples. 1 Before the preparation of the sample, the moisture content of the sample should be dried to approximately half the water content in the standard condition (drying temperature should not exceed 600C). 2 Hang the sample in air of 20Â±20C and 65Â±2%RH so that the surface is fully in contact with the conditioned air. 3 Cardboard or paper with good water resistance needs to be prepared for 24 hours or more, until the full weight has not changed significantly. Physical tests should also be held at the same temperature and humidity. The United States belongs to the continental climate. Therefore, the tests are carried out under the standard conditions of 23Â±2Â°C and 50Â±2% RH. Therefore, the test conditions are different, and the test values â€‹â€‹obtained cannot compare the advantages and disadvantages.

The balance of various types of paper moisture varies depending on the type of pulp, and the humidity is 60% R. H. Under the condition, when the moisture reaches the equilibrium point, the coated paper is about 6%, the newsprint is about 10%, and the corrugated paperboard base paper is about 9.5%.

The physical strength of the base paper is greatly influenced by the moisture content, and its variation is shown in Figure 2. Humidity 65%R. H. The intensity of time is 100.

The elongation increases with the increase of the humidity, and the longitudinal change of the base paper is large horizontally.

The tear strength increased with increasing humidity in both the longitudinal and transverse directions, but decreased again in the extreme high humidity range.

Corrugated board production requirements for base paper

The RUNINGABILITY of the base paper

Corrugating medium paper presses hundreds of corrugated irons in a minute at the time of pressing the corrugated medium, so the corrugating medium is very important. Therefore, the plasticity of the corrugated medium paper is very important, and it can be made into a straight and strong corrugated fiber when it reaches a certain standard. Recently, high-speed corrugated paper machines have been continuously increased and the speed has been continuously improved. For example, poor quality of the base paper is enough to affect the operation of the machinery, resulting in a decrease in production efficiency.

Kraft paperboard and corrugated medium paper, whether vertical or horizontal, have a large difference in water content, which can cause serious problems such as poor adhesion, paperboard curling, and falling down. The uneven thickness leads to poor operation adaptability, and the physical strength of the finished product is greatly affected. Therefore, the uniformity of moisture and thickness of the base paper is considered as one of the most important items in the acceptance and use of the base paper. The appearance of the base paper The appearance of the base paper requires the formation of a smooth surface with no holes, cracks, contamination, and other obvious disadvantages. In addition, the color of the surface of the cardboard paper is also a project worthy of attention. The original function of corrugated cartons in the course of their use was to achieve the integrity of the contents of their contents. Now it has evolved not only to protect the contents, but also to take up the responsibility of promoting sales and inspiring consumers' desire to purchase, as it is required in corrugated cartons. The surface is finely printed, and the hue of the cardboard surface is sufficient to affect the printing effect. However, in the papermaking process, due to the difference in the size of the slurry, such as excessive requirements for the surface hue, there are practical difficulties. On the acceptance of the surface color of container board paper, the upper limit of control and the lower limit of control shall be established, and the design of the printing pattern shall be supplemented with the cooperation of the ink, so as to achieve the beautification.

There are many different styles of Brush Sets in this category. Some styles are normal, some are
special, and some are unique designed. Each set comes with both Face Brushes and Eye Brushes. In this category, you can find all the brushes that you may need for applying powder, blush, contour, highlighting, foundation, eye shadow, concealer, eyeliner, eyebrow, and lip products.
All the brushes are made with synthetic bristles which is cruelty-free, durable and easy to clean. Most of the brushes are made with aluminum ferrules which won't discolor or rust. A few of them are made with electroplated plastic ferrules which looks shinier. Handles of each brush are reasonably designed to fit your hand to hold.

Are you looking for a brush set? Just click into this category to have a look. 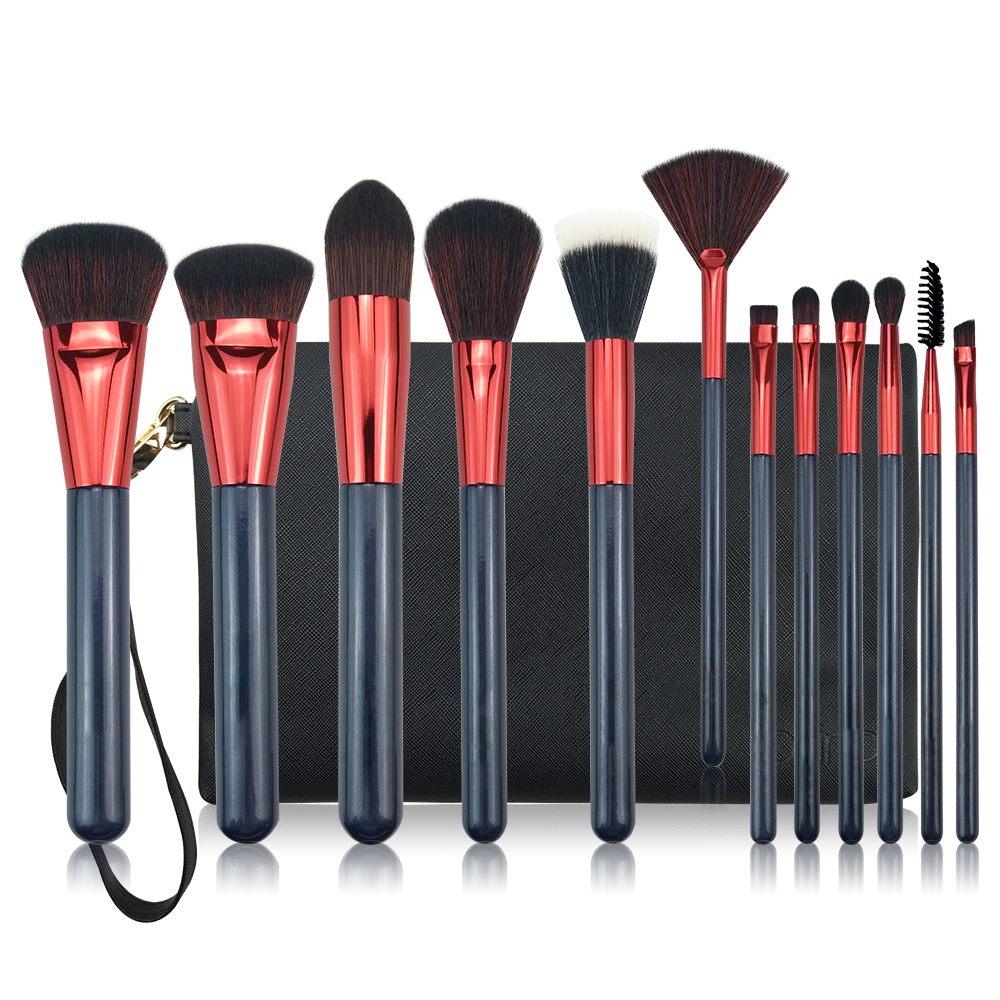 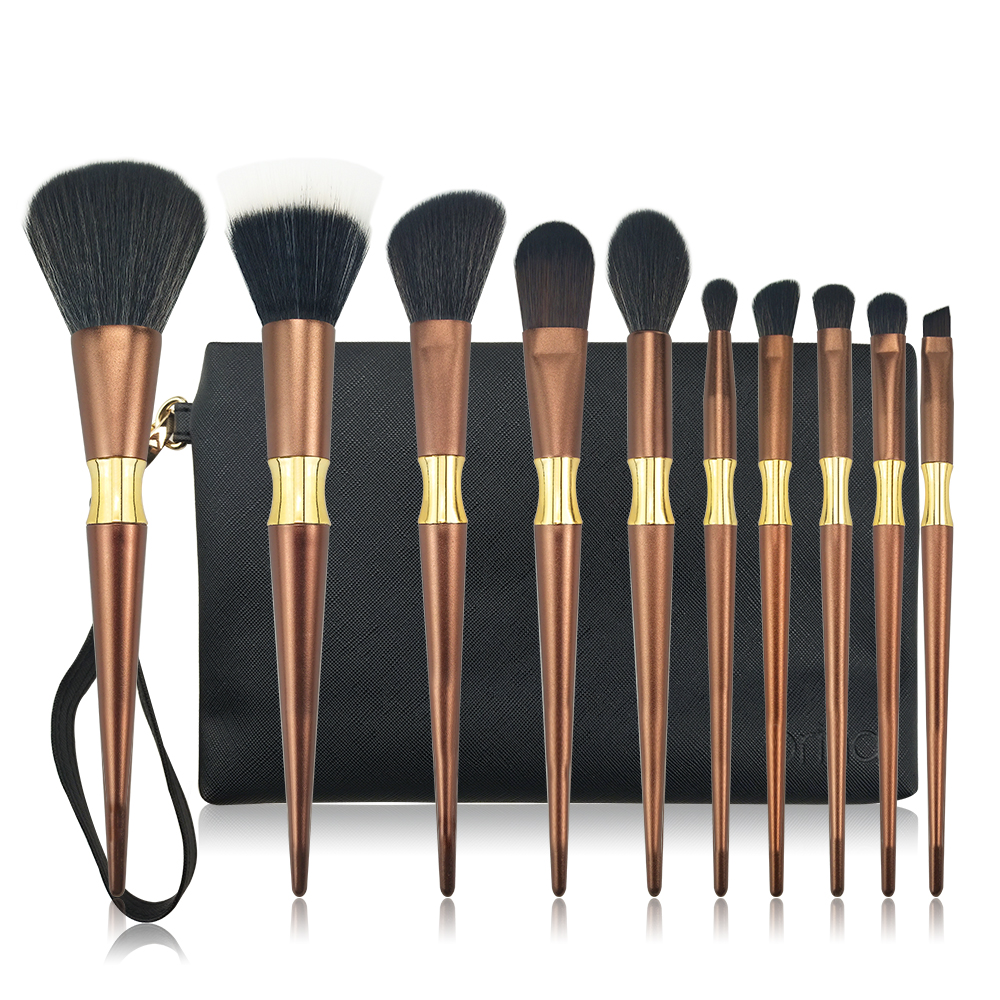